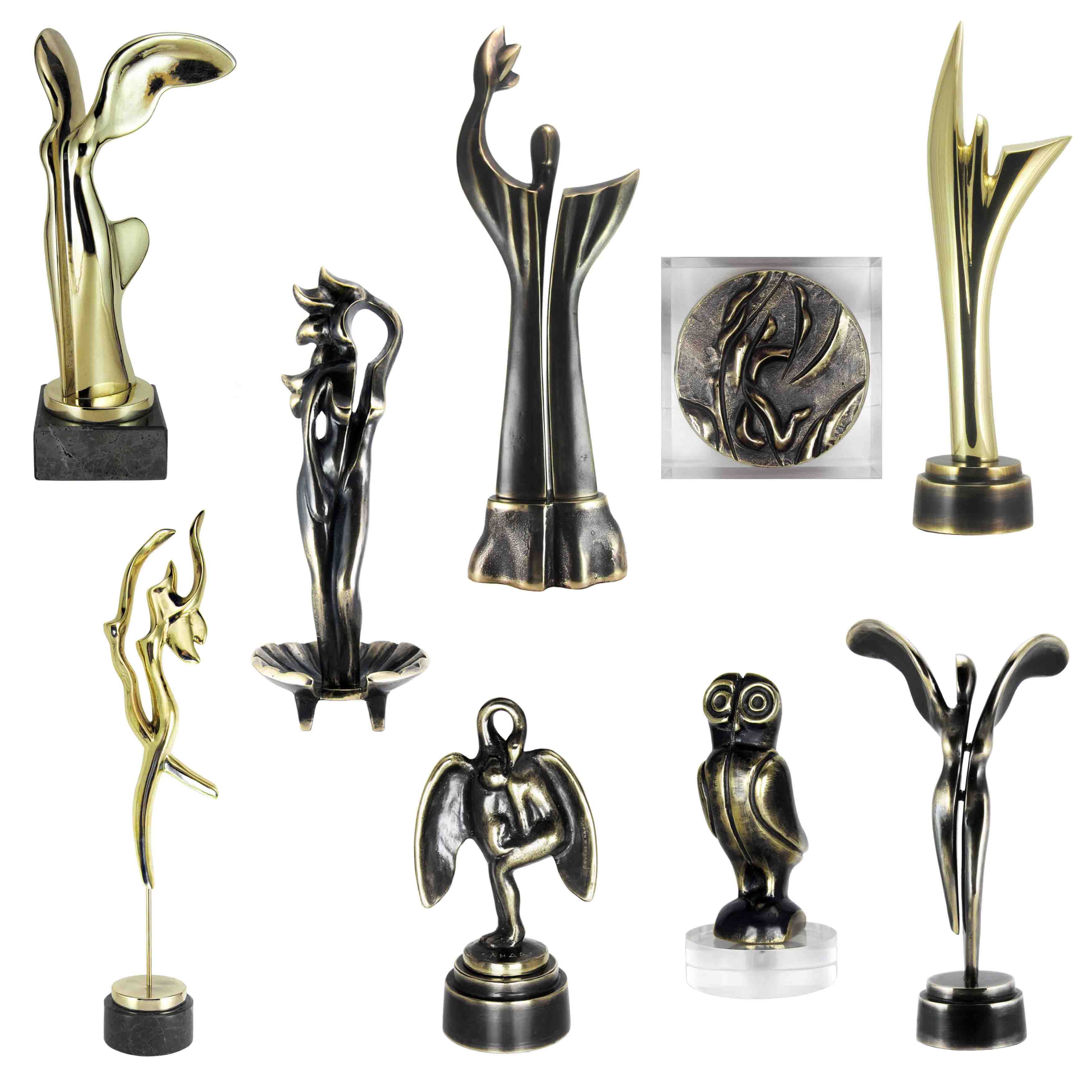 “NIKE” = Victory (in Greek: «ΝΙΚΗ») is a modern adaptation of “the winged Victory (or NIKE) of Samothrace”, a 2nd century BC marble sculpture of Classical Greece, which is nowadays displayed at the Louvre. According to Greek Mythology... 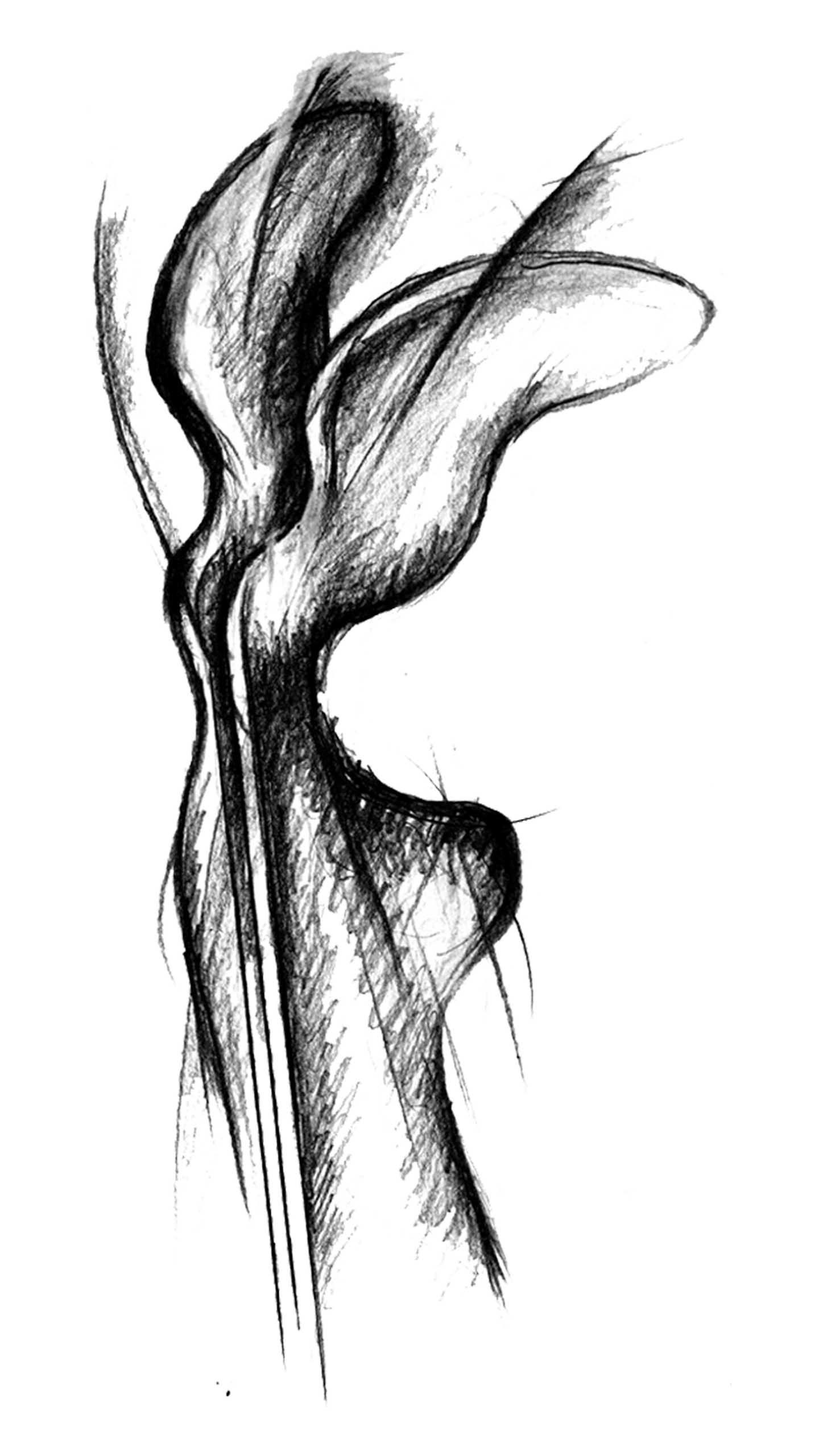 ...“NIKE“ the goddess was sent by Zeus from Olympus to crown the champions of antiquity, such as the winner athletes at the Ancient Olympic Games. Actually, “NIKE” is the final part of the Olympic Triptych: Truce, the Games, Victory. In this modern adaptation of the goddess, the simplified and ethereal form, the vertical cut in the middle of the statue, the elevated position of the wings, all emphasize and express the elevating feeling of Triumph. Being located in four Olympic Cities already, “NIKE”, the sculpture of the winged goddess of Victory, stands in the core of the Olympic Legacy that the sculptor is building since1996, when the first “NIKE” was installed in Atlanta. Since 1996, Olympia, Atlanta, Salt Lake City, Sydney, Athens, Beijing, Vancouver B.C., London have received the sculpture of “NIKE” and different other Olympic statues of the sculptor, creating an ever growing network of Olympic Cities and building up this Olympic Legacy.

"PROMETHEUS" (in Greek: ΠΡΟΜΗΘΕΑΣ) is the Titan who according to myth offered the gift of flame to humankind, taking it away from Olympus. Zeus punished him for this to eternal torture on Mount Caucasus, having him chained on the rocks... 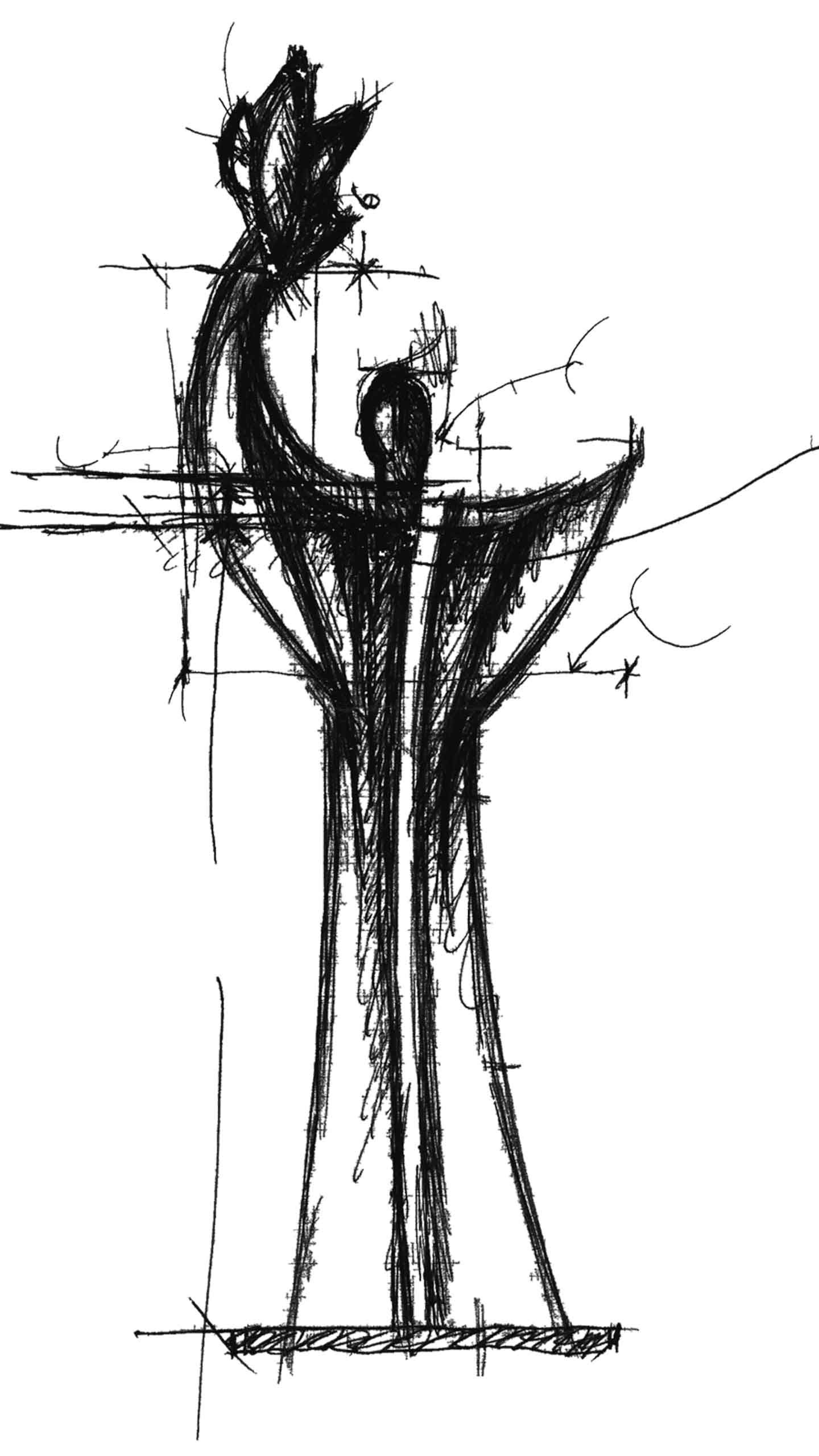 ...and an eagle eating his liver every day anew. Hercules, finally liberated him, killing the eagle with his arrows. In the Olympic Games, the high priestess of Olympia was dedicating the Olympic Flame to "PROMETHEUS", honouring the Titan for his endowment towards humanity. According to myth, "PROMETHEUS" is even credited with the creation of the first human being on the sacred mountain Parnassus. "PROMETHEUS" is a timeless symbol of the endless guest for light, knowledge, arts and sciences, dignity, freedom, the struggle of man to reach the limits of his existence. This statuette is inspired by the philosophical figure of this mythological champion of humanity. 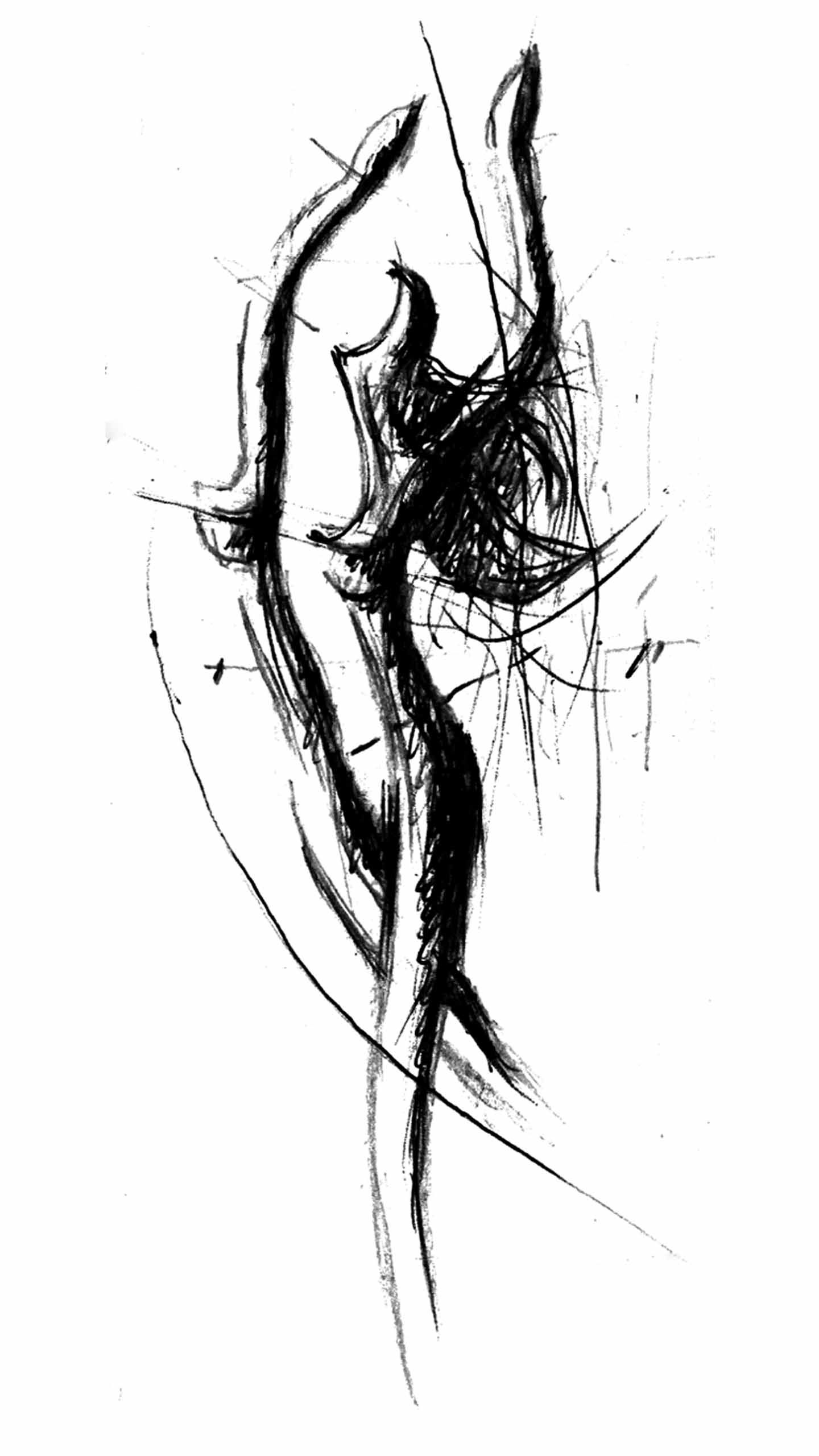 ..."enjoyment of dance". In Greek Mythology, TERPSICHORE was one of the nine Muses, daughters of Zeus and the personifications of knowledge and the arts, especially literature, dance and music. So TERPSICHORE was awarded the role of the patron of dancing and choral song. This statuette, stands as an abstract representation of the dancing figure of the Muse.

“APHRODITE” (in Greek: «ΑΦΡΟΔΙΤΗ») is according to Greek Myntology, the goddess of love, beauty and pleasure. Her most popular story of origin is the one... 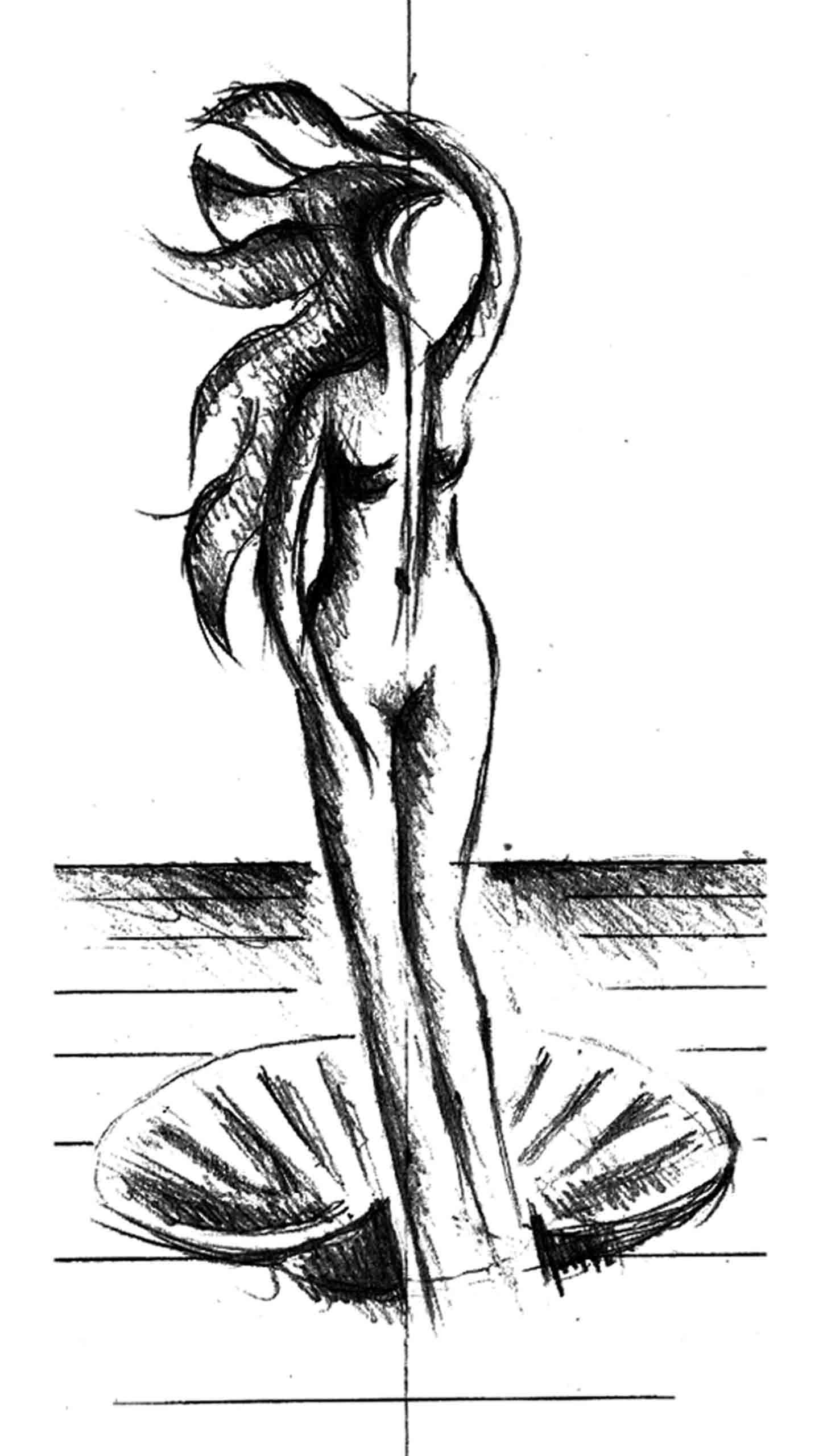 ...found in Hesiod's Theogony, where it is writen that she was born when the titan Cronus cut off his father’s, Uranus, genitals and threw them into the sea. Then “APHRODITE” arose from the sea foam (aphros, in Greek: «ΑΦΡΟΣ») near her chief center of worship, Paphos, on the island of Cyprus. Throughout history, “APHRODITE” has constituted the source of inspiration for countless artistic creations, with two of the most outstanding being the “Birth of Venus” (a renaissance masterpiece painted by Botticelli from 1486) and the “Aphrodite of Knidos” (a classical iconic work of Praxiteles, from 4th century BC). Elements were drawn from both these works, and produced the figure of the goddess emerging from the sea on a shell. This handcrafted cast figure, stands as an abstract representation of one of the most iconic female members of the Ancient Greek Pantheon.

The bronze relief represents a rearing horse with a dismounted rider, 438 BC, inspired by a marble relief of the West Frieze of Parthenon, at the Acropolis Museum, Athens. The Frieze represents... 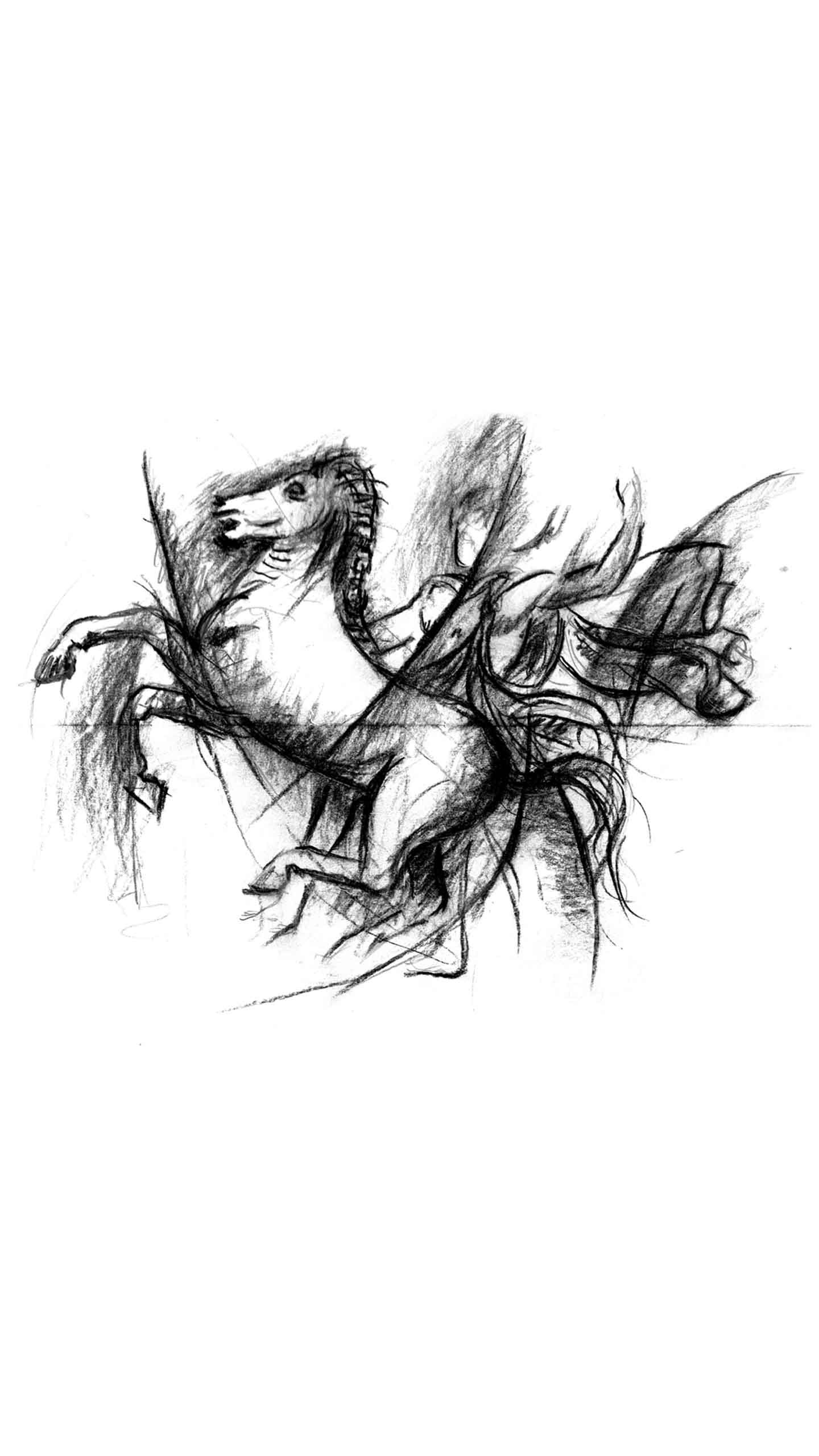 ...the Panathenaic Procession, held every four years in honor of the Temple and City’s patron Goddess Athena. It begins on the west side with various riders making preparation, then runs eastwards along both the long sides, north and south, before culminating in a group of seated deites on the east side in front of which are chariots, musicians, offering bearers and sacrificial animals. The famous frieze of the Parthenon was the most ambitious ever conceived, forming a continuous strip of marble relieves around the perimeter of the inner part of the temple. It was thus the least easily seen, being set high within the colonnade and originally richly coloured to increase legibility from such a distant, shadowy position.

The OWL is generally associated with wisdom. This link goes back at least as far as Ancient Greece, where the OWL’s clean and deep gaze established the bird as the symbol of... 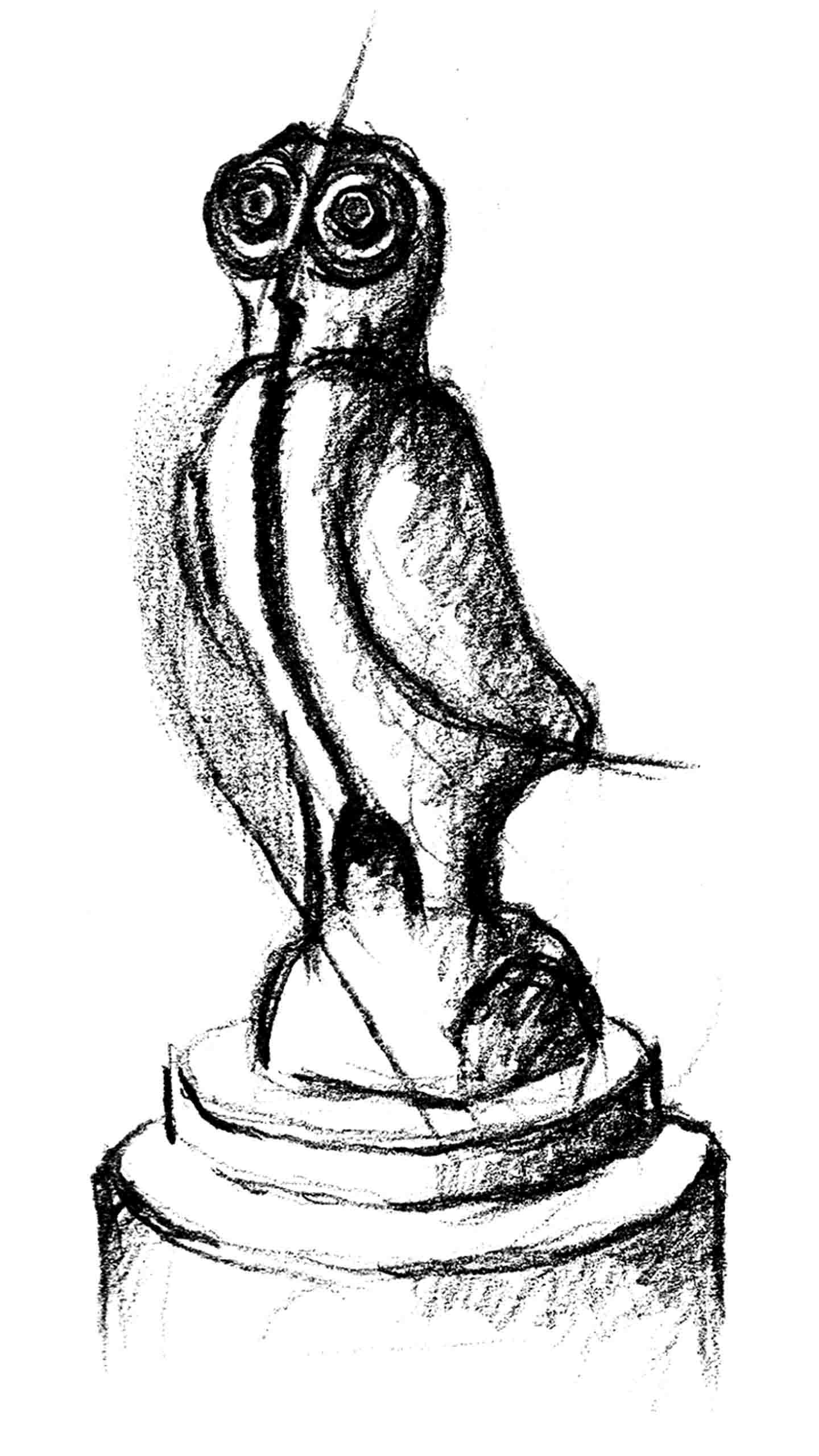 ...Athena, the goddess of wisdom and virtue and the patron of the City of Athens, where the OWL was protected and inhabited the hill of Acropolis in large numbers. Furthermore, goddess Athena was regarded as a main war deity, making her symbol, the OWL, the protector that guided the Greek army in war. Actually, it was said that If an OWL flew above Greek soldiers before a battle, that was an omen for Victory, carried by the sacred messenger of the goddess. Finally, Athenians considered the OWL as the protector of the Athenian commerce and so they were honouring the bird by borrowing its figure in order to decorate the one side of the Athenian coins. This handcrafted statuette, stands as a modern representation of the sacred bird of Ancient Greeks, inspired by ancient figures, such as the emblematic marble statue (300 B.C.) at the entrance of the Acropolis Museum.

This composition draws inspiration from the 16th century B.C., famous wall-painting of "Spring" at the Akrotiri in Thera, Santorini, now... 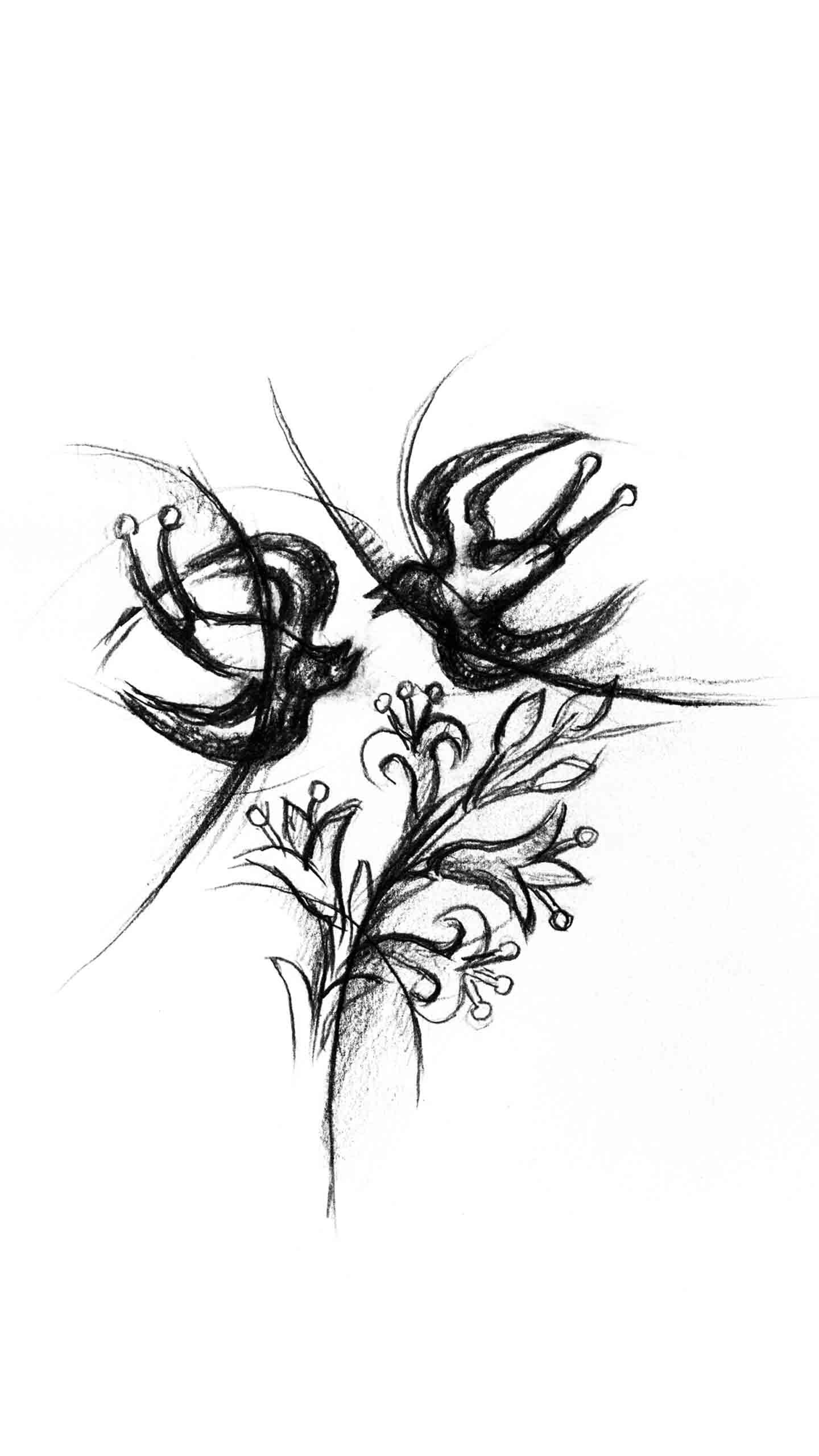 ...displayed at the National Archaeological museum in Athens. The fresco’s theme, the springtime revival of Theran nature, was probably associated with religious rituals to celebrate the arrival of spring. Clusters of blossomed red lilies dominate the rocky volcanic landscape, while swallows swoop above, singly or in flirtatious pairs. A playful scene of the island Stroggyli (Santorini) before the Minoan eruption of Thera. Of all the wall-paintings uncovered in the prehistoric settlement of Akrotiri this is the only one found in a basement room, and covered three walls. It is attributed to the painter of the Crocus Gatherers painting in Akrotiri.

The emblematic figure of the king of the ancient Greek kingdom of Macedon, “Alexander the Great”, who... 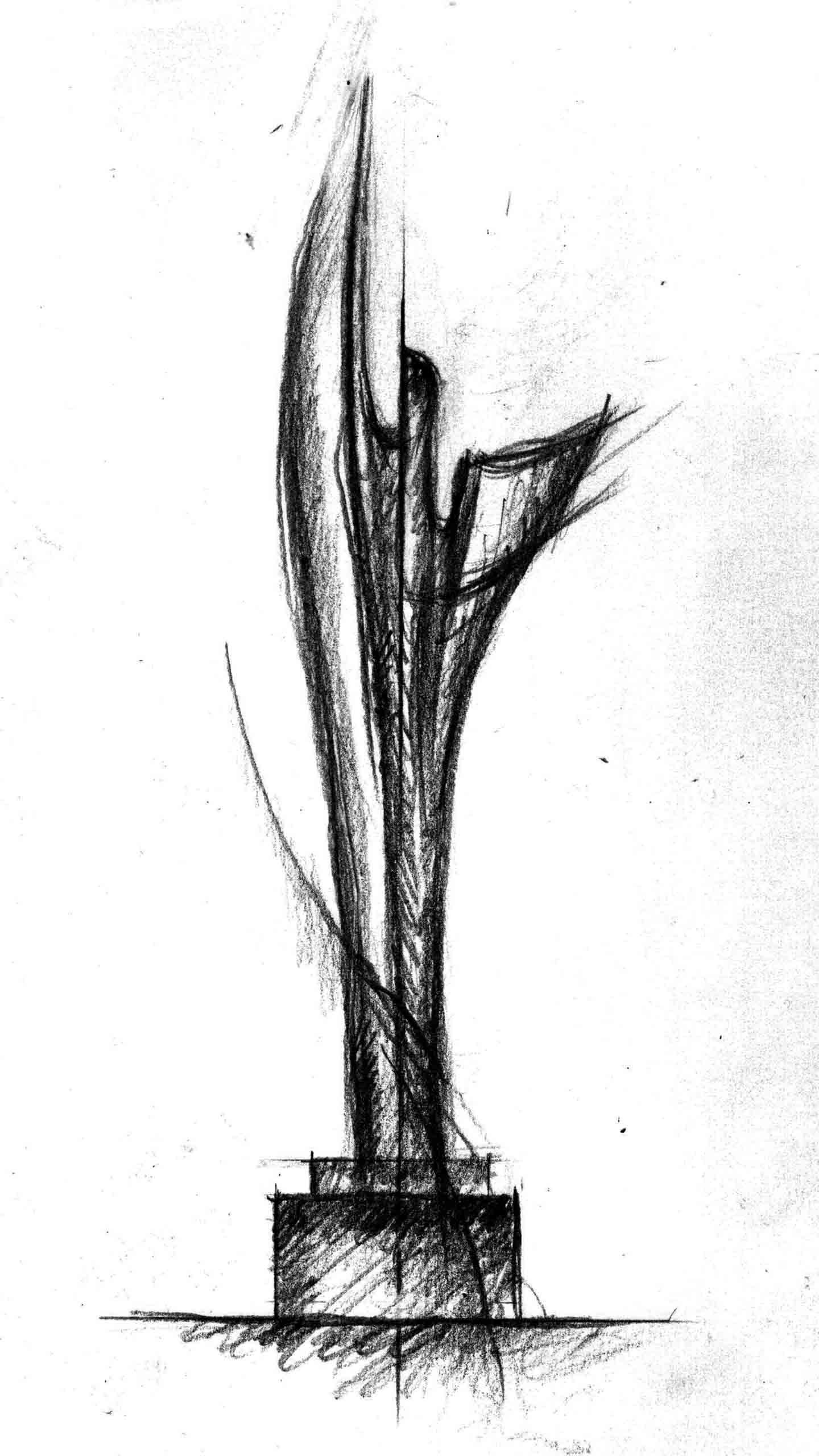 ...established Hellenism across the known world and through his rule and conquests marked the course of history as very few personalities ever managed to do.

LEDA (in Greek: ΛΗΔΑ) was a Mythological queen of Sparta, wife to king Tyndareus, and mother of Helen (later known as the beautiful "Helen of Troy"), Clytemnestra and Kastor & Polydeuces. The myth...

...of LEDA is based on her love affair with the king of Gods, Zeus, who was her admirer and seduced her in the guise of a swan. As a swan, Zeus fell into her arms for protection from a pursuing eagle. Their consummation resulted in two eggs from which all of her children hatched. This myth gave rise to the popular motif in Renaissance and later art of Leda and the Swan. This statuette is inspired by the classical figures of one of the most popular mortal love partners of Zeus.

An abstract representation of the powers of creation. 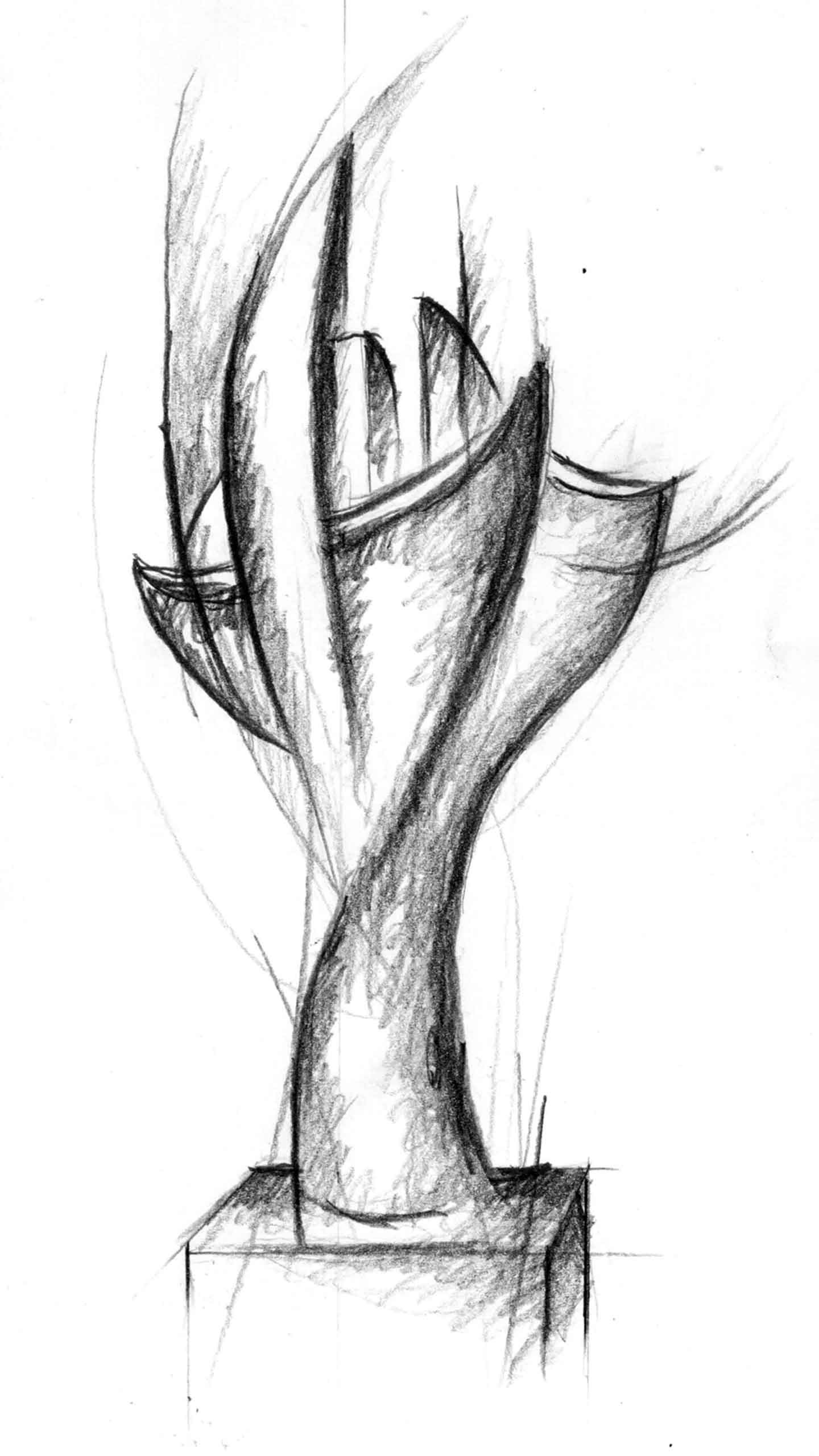